Sign up for e-mail or
text message alerts!
Get Involved 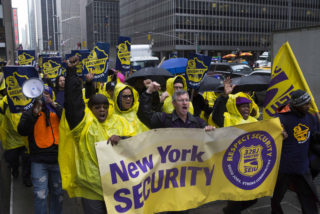 Another important victory in the fight for $15 and safer cities

Security officers at SEIU Local 1 and 32BJ won new union contracts that will bring thousands of officers above $15 and enhance many benefits, including retirement programs, in both cities.

In Chicago, security officers won additional investments in their work and their communities following the deadliest first quarter their city has seen in years.

More than 1,700 working families will benefit from the new downtown contract, which lifts most officers above $15, maintains fully employer-paid health care, and increases pension benefits. Together, the security officers are expected to bring $46 million to their local economies, pumping necessary resources into Chicago’s struggling neighborhoods.

Now downtown officers are supporting 6,800 suburban officers who will bargain a new contract by the end of the year.

After half of 32BJ security officers surveyed in 2016 said they were worried about their personal safety on the job, officers were able to win immediate access to the training program they have developed.

First 1,000 New York officers won a strong agreement to strengthen training, holiday and sick leave provisions. Then 9,000 more officers in the city won 100-percent employer-paid family healthcare for thousands of officers whose families weren’t yet covered, guaranteed paid time off, and their first contributions to a 401(k).

Both New York contracts will raise minimum wages above $15—another important victory in the Fight for $15 and safer cities.

This story is from the SEIU Blog.